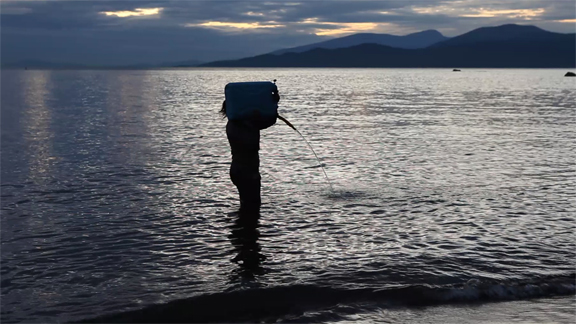 The video marks a second stage in the travel of the water from the Mackenzie River in Fort Simpson (Northwest Territories) to Vancouver.

In 1789, financed by the North West Company and accompanied by local guides, the explorer Alexander Mackenzie canoed the river hoping to reach the Pacific Ocean, and open a lucrative trade route to the East.  His journal was my connection to his time and thoughts.  When his explorations revealed the river did not lead to the Pacific, he apparently named it “Disappointment River”.

His perceptions became the impetus for my work.  Furthering the concept of measured time, I brought a jerry can containing the water and poured it into the Salish Sea neighboring the Pacific Ocean.  Temporarily, for approximately two minutes, the northern flow of the Mackenzie was directed west; temporarily, assuaging Mackenzie’s anguish, and fulfilling the promise of the river.  The performance made concrete the tremendous hope and subsequent dashing of the same of the explorer and the company that backed him.  Whether the performance can lessen the disappointment of the river’s direction or bring new appreciation for the Mackenzie as it is, rather than as its namesake had hoped it to be, is left for the audience to decide.

The redirection of the river also makes reference to redirection as a trick used by magicians to divert attention and take advantage of the shortcomings of human vision and awareness.  A redirection can stand as a metaphor to illustrate deception, and also to examine the meaning of a name.  In the case of the river, the redirection is threefold: Mackenzie considered it his prerogative to rename the Dehcho (the local aboriginal name of the river) “Disappointment River”, only to have his choice of appellation superseded by his own name.

The work suggested an imaginary timespace by fusing anachronous events, the explorer’s narrative, and my own movement.